“Students in Resistance” is a newsletter published by students from University of Nottingham Malaysia (UNMC).

“Students in Resistance” is a newsletter published by students from University of Nottingham Malaysia (UNMC). It’s a platform, a laboratory – experimental, organic, purposive, nameless, of students views and commentaries.

According to designer, Tan Zi Hao, the stylistic influence of this particular project, was inspired by Paula Scher’s Public Theatre’s posters and Barbara Kruger’s typographic artworks. It also refers to the works of Jonathan Barnbrook, Zuzana Licko (Émigre) and Neville Brody. 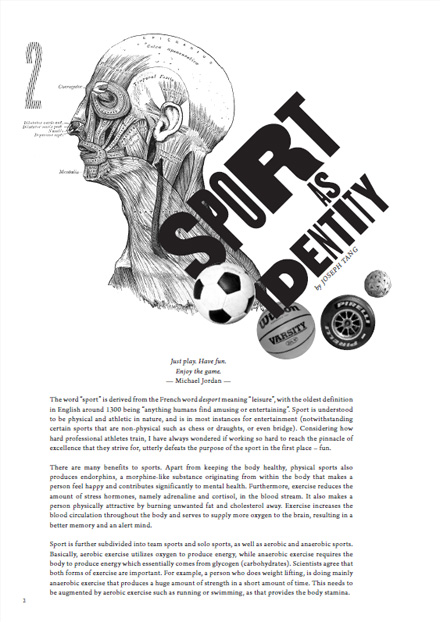 “The text is our weapon” is something that the group strongly upholds and therefore most of the illustrations were highly typographic, as if one were extracting “images” from the text itself. The treatment is conservative, employing a rather strict textualist reading.

However, the visual representation also creates distinctiveness to the voice(s) amidst a mundane academic environment, in this case sub-culture and postmodern aesthetics of the 90s, it creates that identity without adumbrating the diversity of the writers. And due to budget constraint, the zines is in black and white, so one needs to be very playful and sensitive with types, space and forms to get the most out of a B&W composition.

For more info go to http://studentsinresistance.tumblr.com.

Displaying 12 of 13 items in collection

Displaying 12 of 13 items in collection

To donate materials to our archive collection or if you'd like to make an appointment to see materials from our collection, contact our archivist at archivist@malaysiadesignarchive.org

We’re excited by both the support and potential of growing this collection into a significant resource that can be accessed and shared to create an open platform for collective critical engagement with visual culture.

Monday to Friday: By appointments only
Saturday and Sunday: 10am to 5pm