Issued by the Japanese during their occupation of Malaya between 1942 and 1945. The front of this rare note features a tree bearing fruit, with the obverse featuring a depiction of a ship on the horizon.

Banana money was also used as an informal term given to a type of currency issued by Imperial Japan during the Japanese occupation of Singapore, Malaya, North Borneo and Sarawak and Brunei, and was named as such because of the motifs of banana trees on 10 dollar banknotes. 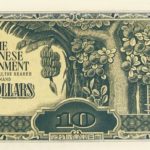 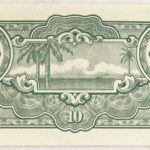 To donate materials to our archive collection or if you'd like to make an appointment to see materials from our collection, contact our archivist at archivist@malaysiadesignarchive.org

We’re excited by both the support and potential of growing this collection into a significant resource that can be accessed and shared to create an open platform for collective critical engagement with visual culture.

Monday to Friday: By appointments only
Saturday and Sunday: 10am to 5pm